The nasal cavities start at the nostril openings anteriorly, and end at the choanae-opening to the nasopharynx.  They are divided by a middle partition, the bony and cartilaginous septum.  There are 2 large turbinates in each nasal cavity – The middle turbinates and the inferior turbinates.  These turbinates occupy most of the non-air containing breathing space.  The turbinates expand the surface area of the nose and more importantly contain venous sinusoids- Large blood filled cavities that have the propensity to swell/expand when inflamed (eg: rhinitis). 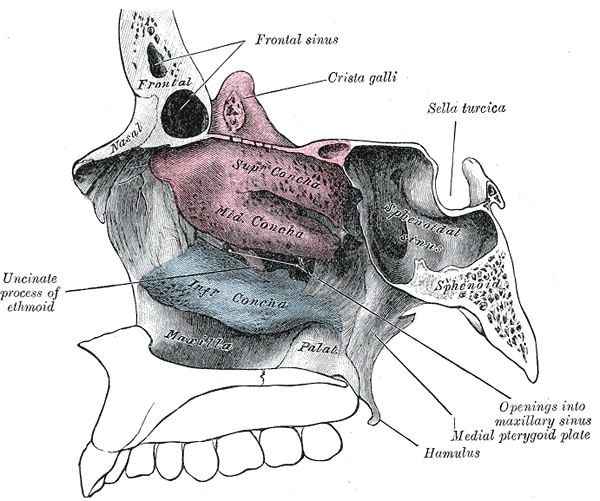 The primary function of the nose to warm, humidify, and filter/clean the air we breathe in.

There are 4 pairs of paranasal sinuses.  The frontal (forehead), ethmoids (between the eyes), maxillary (cheeks) and sphenoids (mid base of skull).

The paranasal sinuses communicate and open into the nasal cavities.  Most of the sinuses (frontal, maxillary, anterior and middle ethmoid) drain into the area lateral to the middle turbinate named the osteomeatal complex.

The function of the sinuses is to expand the surface area of the nose to compliment its duties (warm, humidify, filter air) as well as other rudimentary functions: Shock absorber, resonator, cushion for trauma and decrease weight of head.

The sinonasal cavities are lined by pseudocolumnar epithelium.